30 sent to hospitals in Las Vegas as record heat parks over West, Southwest

Thirty people were taken to hospitals for heat-related injuries and illnesses Friday at a music festival in Las Vegas, authorities said, as a wave of life-threatening blistering temperatures blazed across the West.

Clark County fire personnel treated about 200 people for heat-related nausea, vomiting and fatigue Friday afternoon and evening at the Vans Warped Tour, an eclectic outdoor music festival at the Silverton Casino off the famous Strip.

Most were given water and taken to shaded areas, but 30 had to be taken to hospitals for further treatment, the fire department said.

The high temperature officially hit 117 degrees at Las Vegas-McCarran International Airport — equaling the airport's record — on the same day thousands of people streamed to the casino site for the festival.

Records are similarly expected to be broken across the West and the Southwest through the weekend and into next week, the National Weather Service said, thanks to a high pressure "dome" parked over the sprawling region.

Death Valley, Calif., could even top 130 degrees Saturday through Monday, just below the world record high of 134 recorded there on July 10, 1913, The Weather Channel said.

Temperatures in Phoenix are expected to soar between 115 and 120 degrees. In western parts of Arizona, temperatures could reach 125.

"If you get dizzy or lightheaded, those are some signs of dehydration. If you become confused, that's a real warning sign," Dr. Kevin Reilly of the University of Arizona Department of Emergency Medicine told NBC station KVOA of Tucson.

In Las Vegas, meanwhile, the National Weather Service warned of the potential for a "life-threatening heat event." Temperatures were expected to match those of a July 2005 heat wave when 17 people died in the Las Vegas Valley.

The extreme weather is expected to reach Reno, Nev., reach across Utah and stretch into Wyoming and Idaho, where forecasters are predicting potentially lethal hot spells. Triple-digit temperatures were forecast during Idaho's Special Olympics in Boise. 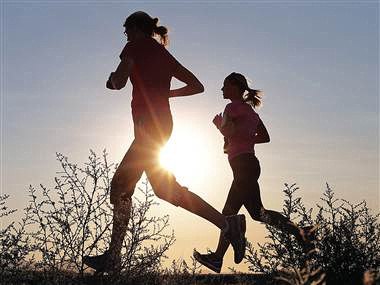 Runners take advantage of lower temperatures at sunrise Thursday in Mesa, Ariz. Excessive heat warnings will continue for much of the Desert Southwest as building high pressure triggers major warming in eastern California, Nevada and Arizona.

"The basic stuff, wearing breathable, appropriate clothes, staying in the shade as much as possible, staying hydrated is obviously a big thing," Matt Caropino, director of sports and training for Special Olympics Idaho, told NBC station KTVB. "We've put in place some misters that we're going to have at our outdoor venues."

"Heat stroke symptoms include an increase in body temperature, which leads to deliriousness, unconsciousness and red, dry skin," it said in a report. "Death can occur when body temperatures reach or exceed 106-107 degrees."

Los Angeles was forecast to peak between the upper 80s and the lower 90s Saturday as inland communities like Burbank edge toward the low 100s. Palm Springs, Calif., no stranger to steamy summers, may peak at 120 degrees, NBC station KMIR reported. Sweltering heat also is expected for the state's Central Valley, according to The Weather Channel.

While the west remains hot and dry, the east is getting lots of rain that has resulted in flash flooding. Some of the worst flooding was in upstate New York where whole neighborhoods remain under water.  The Weather Channel's Mike Seidel reports.

Commercial airlines were also monitoring conditions because excessive heat can throw flights off course. The atmosphere becomes less dense in extremely high heat humidity, meaning there's less lift for airplanes — calculations that have to be made individually for every type of aircraft.

Triple-digit heat forced several airlines to bring operations to a halt after Phoenix climbed to 122 degrees in June 1990.

Daniel Arkin of NBC News contributed to this report.

'It's brutal out there': Weekend heat wave to bake western US