Prop 8 challengers wed in California after stay is lifted

On the eve of San Francisco's Pride Weekend, State Attorney General Kamala declared Sandra Stier, 50, and Kris Perry, 48, "spouse and spouse" shortly before 5 p.m. (8 p.m. ET) at San Francisco City Hall. In their vows, the couple took each other as "lawfully wedded wife."

"Right now, we feel really victorious and thrilled and relieved to be at the end of this long journey and just move forward like a regular married couple," Stier said in a conference call with reporters — but not before she introduced Perry as "my beautiful wife."

Stier said she and Perry hadn't had time to schedule a honeymoon. But Perry said that after a celebration with "all of the people we love ... Sandy and I will go somewhere alone."

Paul Katami and Jeff Zarrillo, one of the couples who successfully challenged California's Proposition 8, marry in Los Angeles.

About 90 minutes later in Los Angeles, Mayor Antonio Villaraigosa married the other couple, Paul Katami and Jeff Zarrillo, on his last day in office.

The ceremony, Katami said, was "about celebrating our private commitment and our public connection."

As the ceremony began, Villaraigosa said: "I've done a few of these over the last couple years, but never have I been prouder. Never have I been more joyful than I am today. This is a special moment."

Many state officials, including Harris and Gov. Jerry Brown, celebrated the decision Friday on Twitter: 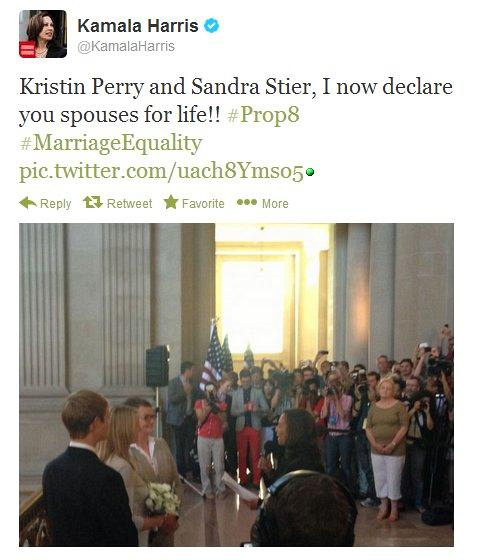 San Francisco City Hall will stay open until 8 p.m. Friday and will be open 9 a.m. to 5 p.m. Saturday and Sunday for marriage licenses. The Los Angeles County registrar and clerk's office said it was deputizing extra marriage commissioners and extending days and locations to accommodate an expected rush of weddings.

Gina Alcomendias, the clerk-recorder for Santa Clara County, said few people had shown up at the County Building because the appeals court's decision came late in the day.

But "we're going to be busy Monday, I think — the whole week next week," Alcomendias told NBC Bay Area. "Probably for a long while."

The 9th Circuit U.S. Court of Appeals lifted its stay two days after the Supreme Court declined to rule on Proposition 8, thereby upholding a lower court's decision overturning the ban. The appeals court had blocked enforcement of that ruling pending the Supreme Court decision.

The justices also struck down the Defense of Marriage Act, a 1996 federal law that barred recognition of same-sex marriages.

Supreme Court rulings generally don't take effect for 25 days. But Harris had called on the 9th Circuit to lift its stay as soon as possible Wednesday after Brown told the state's 58 counties to prepare for same-sex marriages.

Brown issued an order Friday afternoon making that official, declaring that "marriage licenses must be issued to same-sex couples immediately."

The Protect Marriage Coalition's Proposition 8 Legal Defense Fund, which sponsored the ballot initiative, did not immediately return calls seeking comment. But in a statement, the group said it had been deprived of "our right to ask for reconsideration," calling the appeals court's decision an "outrageous act of judicial tyranny."

Theodore Boutros, one of the plaintiffs' lawyers, said the appeals court was fully within its rights to lift its injunction, which simply restored the status quo in the circuit. Any attempt by opponents to seek reconsideration of the Supreme Court ruling is a separate matter, he said.

Watch the most-viewed videos on NBCNews.com