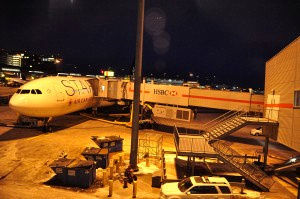 An Air Canada A330 in Montreal

Air Canada announced that it has halted flights to Caracas, Venezuela, effective immediately, in response to ongoing civil unrest in the city and country.

“Due to ongoing civil unrest in Venezuela, Air Canada can no longer ensure the safety of its operation and has suspended flights to Caracas until further notice,” the airline said Monday in a statement posted on its website.

The airline said it will “continue to monitor the situation” with the goal of being able to resume flights  once the carrier “is satisfied that the situation in Venezuela has stabilized.”.

Before it ceased operations to Caracas, Air Canada was operating three weekly flights from Toronto.

Last week at a news conference, the country’s president, Nicolás Maduro, threatened retribution against airlines that cut back on flights to Venezuela, promising to take “severe measures” and limiting their ability to return to serving the country as a destination.