American to Replace Regional Jets with Bigger Planes Between Hubs 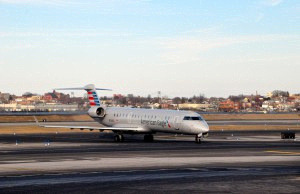 An American Eagle plane at LaGuardia this week

American Airlines announced it will begin flying larger aircraft on flights between American and US Airways hubs and also reduce flying by regional carriers under the American Eagle name.

The change was announced in the company’s weekly newsletter, Arrivals, and is slated to begin in June.  The two airlines “will begin harmonizing our networks by aligning and increasing flying between our hubs where US Airways already operates mainline service.”

Between Charlotte and Miami, US Airways will add two daily flights, for a total of nine, and American Eagle will discontinue its five daily flights.  From Charlotte to Chicago, US will add three flights, for a total of 11, and Eagle will discontinue its five flights.   Eagle currently operates these routes with 50-seat Embraer E145 aircraft.

Between Los Angeles and Phoenix, US Airways will add two flights, for a total of nine, and SkyWest Airlines will discontinue three out of four flights.   SkyWest operates its American Eagle flights with Bombardier CRJ-200 planes.

In all cases, the changes will open up a significant number of seats even with a reduction in frequency. The regional jets can be redeployed to other markets, the company said.

American said that the changes will allow the airline to replace smaller, less efficient regional jets with larger, more efficient mainline aircraft, and „Customers will benefit from more seats between our hubs, better matching the demand for hub-to-hub flying“ as a result of the merger.