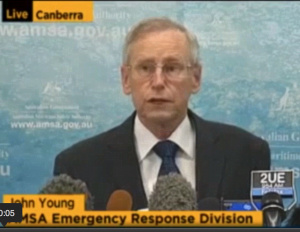 Australia is leading a search for the missing Malaysia Airlines plane in the Indian Ocean following the release of new satellite images of that region.

“The Australian Maritime Safety Authority has received information based on satellite imagery of objects related to the search,” the prime minister said, and emphasized that the objects may turn out to have nothing to do with the lost aircraft.

The news is the strongest lead so far in a multinational search that has yielded nothing but headlines and false hopes.

The larger of the two objects spotted is believed to be 24 meters (78.75’) long, he said.  “The indication to me is that they are objects of a reasonable size and probably awash with water, bobbing up and down on the surface.”

“It must be stressed that these sightings, while credible, are still to be confirmed,” said Hishamuddin Hussein, the Malaysian defense minister and acting transport minister, at a news conference on Thursday.

A Royal Australian Air Force Orion jet as well as three additional aircraft have been conducting a search in the area.  Australia also sent a warship to the area of interest to help in the recovery of large objects, if found.

“The task of locating these objects will be extremely difficult,” said Abbott.

The missing plane is thought to have headed in one of two possible directions, north west into Asia or south west into the Indian Ocean.  Australia has been leading the search in the latter region, an area three hours and 3,000 kilometers (1,864 miles) southwest of Perth.  Australian authorities said that “the sheer size of the search area poses a huge challenge” given that it’s more than 6,000 square kilometers (2,316 square miles).