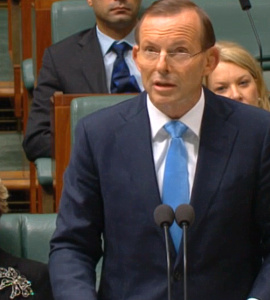 One day after the search for the missing Malaysia Airlines plane expanded to new sectors, the Australian government announced that it located two objects that might be related to the aircraft.

“The Australian Maritime Safety Authority has received information based on satellite imagery of objects related to the search,” the prime minister said.

A Royal Australian Air Force Orion jet has been diverted “to attempt to locate the objects” and it was expected to arrive in the area at approximately the same time that the prime minister was speaking.  Three more aircraft will follow the Orion, the prime minister said, tasked “for more intensive follow-up search.”

“The task of locating these objects will be extremely difficult,” said Abbott, adding that it “may be they do not relate to the aircraft.”

The missing plane is thought to have headed in one of two possible directions, north west into Asia or south west into the Indian Ocean.  Australia has been leading the search in the latter region, an area three hours and 3,000 kilometers southwest of Perth.  Australian authorities said that “the sheer size of the search area poses a huge challenge” given that it’s more than 6,000 square kilometers.