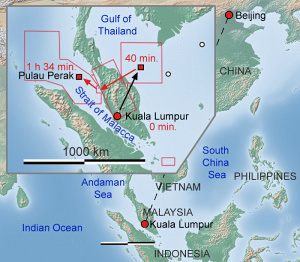 As dawn breaks Monday over the Indian Ocean, new information on the missing Malaysia Airlines plane is coming to light.

Military radar that tracked Flight 370 between 1:19 a.m. and 2:40 a.m. shows that the plane not only made a sharp turn over the south China Sea, but that it was also flying at an altitude of 12,000 feet before it disappeared from radar screens. This is significant because the question that has been continuously raised is why the plane made that turn in the first place, heading away from its destination of Beijing, China.

Earlier on Sunday, the Malaysian Ministry of Transport said that the last Acars transmission from the plane, which took place at 1:07 a.m., showed nothing unusual and indicated a “normal route” to Beijing, thus showing that the turn was neither pre-programmed nor pre-planned.

The revelation of a substantial drop in altitude appears to at least partially dampen enthusiasm for the theory that an individual changed the plane’s flight path before the co-pilot signed off with air-traffic controllers for the last time with “All right, good night.”

The change in altitude may be significant because it offers an explanation as to what might have happened in the cockpit around 1:19 a.m., although there is far too little information available for investigators to rule out any other possibilities.

The drop in altitude supports what many aviation experts have been saying over the past week, namely that there could have been a catastrophic event in the cockpit such as a fire or explosion.  Standard protocol would call for the pilots to execute a high dive, otherwise known as an emergency descent, bringing the aircraft rapidly down to 10,000 feet. The pilots would want that altitude because there are no worries about pressurization and there’s enough air to keep everyone alive.

This kind of emergency descent can bring about other problems.  In 1997, SilkAir Flight 185 went into a high dive from its cruising altitude, and the sheer speed of the descent caused the aircraft to begin to break apart before it crashed.

The new information does not, however, provide all the answers on what went wrong on Flight 370.  Neither pilot signaled an emergency, a move which only takes seconds and which normally would have happened in the case of a fire or explosion.  It is, however, possible that the plane’s radios were rendered inoperable due to an explosion or fire, which would explain the lack of such a signal.