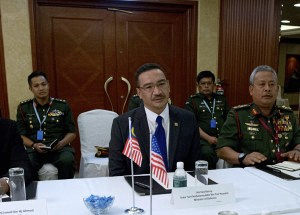 One day after the investigation into the missing Malaysia Airlines jet became a criminal inquiry, a senior government official said that the one of the plane’s communications systems was disabled before a pilot spoke with air traffic control.

Speaking to reporters at a news conference Sunday, Hishammuddin Hussein, who is both the country’s minister of defense as well as its acting minister of transport, acknowledged that the plane’s captain, Zaharie Ahmad Shah, had spoken to Malaysian air traffic control after the Aircraft Communications Addressing and Reporting System, or Acars, had been turned off.   “Yes, it was disabled before,” he said after the question arose.

The pilot’s reported last words, “All right, good night,” heard from the cockpit of Malaysia Airlines Flight 370, did not indicate any issues with the aircraft or its systems.

Acars is a digital data communications system that supports the transmission of short, relatively simple messages between aircraft and ground stations via radio or satellite.  Its functions including reporting status messages such as changes to the major changes of flight using aircraft sensors as well as information from the aircraft condition monitoring system systems which analyze engine aircraft and operational performance conditions and are capable of identifying abnormal flight conditions and transmitting them to an airline.

On Saturday, Prime Minister Najib Razak said a thorough review of military radar and satellite data by multiple countries including the United States and United Kingdom had shown that Flight 370 vanished due to “deliberate action” of someone on the aircraft.