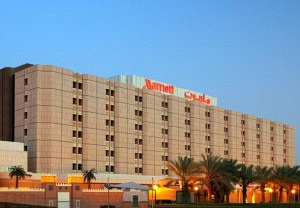 Exterior of the Riyadh Marriott Hotel

Marriott announced the completion of a multi-million dollar renovation project to the Riyadh Marriott Hotel.  The refurbishments to the Saudi Arabian property took approximately one and a half years to finish.

All of the hotel’s 418 guest rooms were remodeled to include smart lighting, and each room was redesigned with a palette of neutral hues and Marriott’s signature red.

The hotel also offers new dining options, including the Atrium Café, located in the lobby, and the Terrace Grill steakhouse.