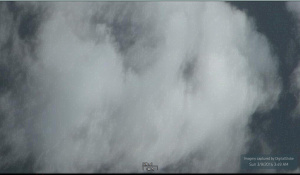 A satellite image of the part of the search area

What appears to be an unending saga continued with yet another conflicting report in the disappearance of Malaysia Airlines Flight 370, last heard from on Saturday.

Malaysian officials denied a report by the Wall Street Journal suggesting that the aircraft continued to fly for several hours after losing contact with the ground.  The report said that U.S. aviation investigators flew for an additional five hours.  The information was said to stem from data send to the ground from the plane’s engines “as part of a routine maintenance and monitoring program.”

The Wall Street Journal also reported that U.S. counterterrorism officials are looking into the possibility that a pilot or someone else on board the aircraft might have diverted it after turning off the plane’s transponders to avoid detection.