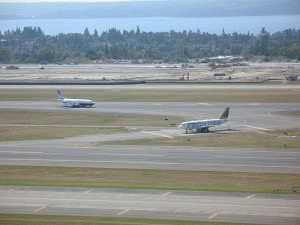 A runway at Seattle-Tacoma

Seattle-Tacoma International Airport announced plans to install 576 new electric charging stations for use by ground support equipment, including baggage tugs, bag ramps, and pushback vehicles. The airport has already installed 296 charging stations in Concourses C and D, as well as the north satellite, and plans to roll out the remainder of the stations to the other terminals by September.

The planned addition is part of a larger project by the airport to convert all ground support vehicles from fossil fuels to electric in an effort to reduce carbon emissions.

In keeping with the airport’s new initiative, Alaska Airlines has already converted many of its ground support vehicles from fuel to electric. The carrier currently has 204 electric vehicles in operation at the Seattle airport.

The new bright yellow charging stations are equipped with plug-ins that can fully charge a vehicle in four hours, as well as smart technology capable of detecting which vehicles need the most charge and distributing the power accordingly.

Seattle-Tacoma is the fifteenth largest airport in the United States, and currently offers service to 72 domestic and 19 international destinations.