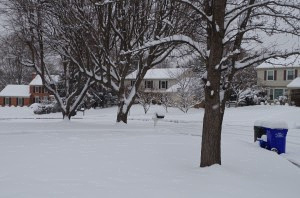 A neighborhood outside of Washington, D.C. Monday morning

WASHINGTON, D.C. — Winter’s not over yet.  Another storm moved in on the Northeast from the Midwest Sunday night, dumping more than half a foot of snow in some places, and is expected to bring more snow, as well as possible ice and freezing rain, to some areas in the region throughout Monday night.

On Monday, as snow continues in the region, already 633 flights have been cancelled, with nearly 1,300 delayed in the country as of 10:30 a.m. Eastern Time.  Our nation’s capital remains the most heavily affected city, with Reagan National seeing 271 cancellations and 78 delays, and Washington Dulles having 90 cancellations and 44 delays.

Philadelphia could see an inch of the white stuff on Monday, while further south in Richmond, Virginia, a mixture of snow and freezing rain could result in as much as half an inch of further accumulation and hazardous road conditions.