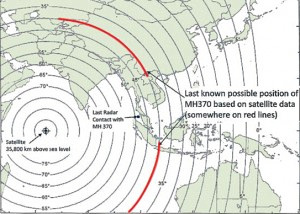 As the search for Malaysia Airlines Flight 370 continued Thursday, officials reported that new satellite images showed more objects in the southern Indian Ocean, but weather conditions forced the curtailment of the search.

Thailand’s space technology agency reported that images from one of its satellites showed 300 objects in the area.  The debris was located 124 miles (200 kilometers) from where a French satellite had spotted numerous objects.

The images showed a variety of objects ranging in size from 6.5 to 32 feet (two to ten meters) in size, across a debris field of roughly 174 square miles (450 square kilometers), approximately 1,677 miles (2,700 kilometers) southwest of Perth, according to the executive director of the Geo-Informatics and Space Technology Development Agency, Anond Snidvongs.

Meanwhile, the Australian Maritime Safety Authority said in a post on Twitter that all search planes had been forced to Perth Thursday afternoon due to weather, which it said would continue for the next 24 hours.  This was the second time this week that weather conditions forced the suspension of the search.

While satellite images have repeatedly showed objects that could be from the missing jetliner, searchers