US Airways Plane Crashes in Philly 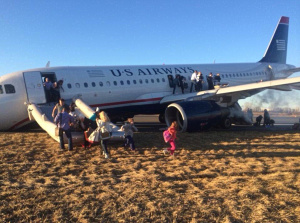 Photo of the US Airways jet after crash landing

A US Airways Airbus A320 crashed during takeoff at Philadelphia International Airport within the past hour.

Flight 1702 was on the runway taking off en route to Fort Lauderdale when a tire blew out, a US Airways spokesman told Frequent Business Traveler.

There were no injuries were reported, according to the airline.

A witness to the crash, posting in the FlyerTalk discussion forum, said that, at approximately 6:26 p.m. local time, he saw the plane “get 30-50 feet in the air, then come down and bounce on the runway, then be airborne for another 2-3 seconds, then land with more weight towards the front landing gear.”

The front landing gear then collapsed and sparks were visible on the runway.  The plane then skidded further on the runway with light white smoke visible for at least 10 minutes thereafter.

A passenger, Dennis Fee, posted a photo of the evacuation on Twitter, writing “Plane just crashed. But we are ok.”

In the picture, passengers were seen carrying bags off the plane during the evacuation, disregarding crew instructions to “leave everything” behind