LONDON — London Heathrow’s new terminal, the Queen’s Terminal or Terminal 2, will open to passengers on June 4 of this year when a United flight from Chicago arrives at 5:55 a.m.

The new terminal, which is one of the largest privately funded construction projects in the United Kingdom in recent history, was designed to address the question, “how do you take an airport terminal designed in the 1950s for one million passengers per year and ensure it’s fit for purpose to be one of the biggest hubs in the world servicing 20 million passengers per year?”

To find how well the question is being answered, I visited the new terminal for the better part of a day and met with airport officials who were spearheading the reinvention of Heathrow. (Four virtual tours of the terminal follow the last page of the article.)

Construction of London Airport’s runways began in 1944 and Her Majesty Queen Elizabeth II opened the original Terminal 2, known then as the Europa Building, in 1955. 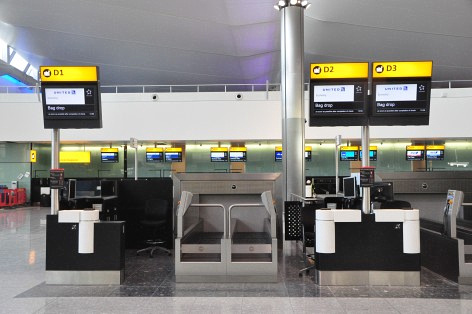 The terminal played a significant role in the history of the United Kingdom, and the world as well.  Who in the 20th century didn’t pass through its portals?

As years passed, however, the terminal, however, became increasingly dated and was in urgent need of replacement, given the important role Heathrow plays in the nation’s and world’s economies, in order to ensure that people and goods get to and from their worldwide destinations.

Heathrow itself is in the midst of a major transformation, one that will eventually see it move from five terminals to three.  In recent years, there have been two major upgrades, namely the 2008 opening of Terminal 5 as British Airways’ home and the subsequent £200 million ($310 million) renovation of Terminal 4, occupied by BA up until that point, as a base for members of the SkyTeam alliance.

Next on the drawing board was a new Terminal 2.