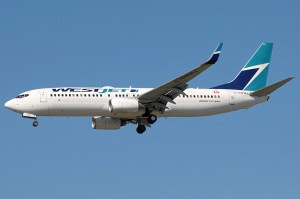 A Westjet aircraft landing in Vancouver

Bombardier announced that WestJet Encore signed an agreement to purchase five of its Q400 NextGen planes. The order is valued at $167 million.

The Q400 NextGen is the newest model in Bombardier’s Q400 line of aircraft, which is designed mainly for short-haul operations.  The aircraft  first entered the market in 2000. To date, the company has received orders for a total of 491 Q400 and Q400 NextGen planes.

The Q400 jetliner is designed with new-technology turboprop that aims to increase both jet speed and fuel efficiency and reduce operating costs for airlines. The aircraft is capable of seating up to 86 passengers.

WestJet Encore is a subsidiary of WestJet, and is based in Calgary. The carrier will begin new service this spring from Fort McMurray, Alberta; Kelowna, British Columbia; and Winnipeg, Manitoba, as well as new service between Toronto-Pearson and Thunder Bay in Ontario.