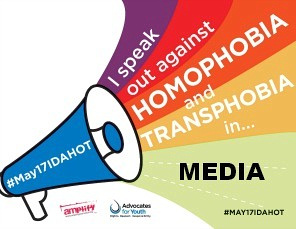 This post was co-authored with Drusilla Menaker, Senior Media Adviser for IREX.

Around the world, we've seen how media coverage can build tolerance toward or incite violence against various minority groups. This is keenly felt by lesbian, gay, bisexual and transgender people, as being openly identified as LGBT in many countries can lead to arrest and imprisonment, loss of employment, and familial and community rejection.

In Uganda this spring, a tabloid published the names and photos of people it claimed were the countries "top homos." The Office of the UN High Commissioner for Human Rights (OHCHR) and others condemned the action as a violation of the rights to dignity and privacy. But the damage was done, causing some of those named to relocate or go into hiding.

And lest we think this dynamic is only confined to the global South, in the United States a digital magazine released a story outing a woman as transgender against her wishes earlier this year. In retrospective, the editor acknowledged numerous problems with the reporting and the utter lack of respect or understanding of issues in the trans community.

These negative examples are not the only ways that media portray LGBT individuals and causes, of course. At its best, the media shares perspectives in a manner that enlightens communities and gives a voice to members of different groups. LGBT activists are media-savvy in many places and effectively share their stories across traditional and new media to raise awareness. And we see publications like The Guardian now proposing new guidelines on how to report on transgender people.

The Need for Monitoring Media Coverage

But what is the global picture for how the media is covering LGBT issues?

It's difficult to discuss this issue to any depth without clear data. At IREX, we've had success working with local groups using our Media Content Analysis Tool, which we propose adapting for LGBT communities around the globe. A media monitoring system can measure the overall frequency -- or lack -- of coverage and the language used regarding sexual orientation and gender issues.

Is the language employed homophobic, transphobic or outright hate speech? Is it neutral or progressive? Do voices in the media condone or even call for violence? Are LGBT issues sensationalized or pathologized? Are people being outed? And how fully is the community being represented (e.g., Are transgender issues ignored? Are issues of importance to the LBT women being covered?)

With deeper understanding of the picture in a given country, opportunities emerge for more meaningful engagement between media and LGBT communities:

In many countries where media sectors are struggling due to repressive laws and lack of resources, journalists and editors have few opportunities to expand their own understanding. Also, media standards are not under systematic scrutiny by advocacy groups. Not coincidently, these are often also places where the media discourse is not fostering greater acceptance and respect for the human rights of LGBT people -- or worse.

The critical role of the media in shaping perceptions -- both positively and negatively -- about lesbian, gay, bisexual and transgender people must be addressed in international development programming and directly by media outlets themselves. Support, including from international LGBT and rights groups and the donor community, is needed so that media can find ways to contribute positively to promoting tolerance.

Whether it's new funding for monitoring coverage of LGBT issues or incorporating LGBT awareness in current media development initiatives around the world, we can make it so that the stories of LGBT individuals and communities are told with the accuracy and dignity that all people deserve.