'For everybody but us': Many same-sex couples left out of historic court rulings 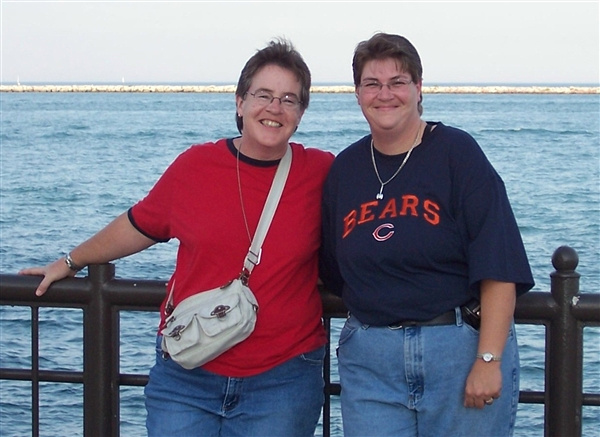 Courtesy of Kris and Judi Travis

Left to right, Judi and Kris Travis, who have been together 16 years and registered as domestic partners in 2009, are shown in a 2007 photo taken in Chicago.

While same-sex couples around the nation rejoiced over the Supreme Court’s landmark gay marriage rulings, the joy of many was tempered by the realization that the decisions would have little practical impact on their relationships because they live in one of nearly three dozen states where gays and lesbians can't legally wed.

That realization added a bittersweet note to the otherwise jubilant mood among same-sex couples and their supporters after the court on Wednesday struck down a 1996 law, the Defense of Marriage Act (DOMA), which barred federal recognition of same-sex couples. The ruling applies to the 12 states, plus the District of Columbia, where same-sex marriages are legal. Another ruling, in California’s Proposition 8 case, affected only that state, where gay marriages can soon resume.

But neither ruling directly affects the 35 states that have constitutional amendments or laws defining marriage as between a man and a woman. One state doesn't have any laws addressing same-sex marriage, while another provides civil unions.

“I’ve been looking at it from a realistic point of view that … in Wisconsin, it’s not going to change for us,” said Kris Travis, 42, a human resources administrator from Oshkosh, who has been in a relationship with her partner, Judi, for 16 years. “I was watching when the verdict came down and I was all excited but … it’s like, yeah for everybody else but us.

“Am I glad that the movement is moving forward? Yes. We went from Hawaii starting this whole thing to 12 states (and) D.C. DOMA’s now gone, and that’s great. But it affects such a small chunk … of the people that it’s just another ripple in the water.”

Chris Reay, 34, a commercial insurance broker in Houston who would be married to his partner of seven years, Hector Frias, 41, if Texas recognized it, said he, too, felt mixed emotions. 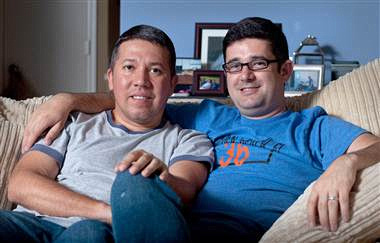 Hector Frias, left, and partner Chris Reay, who have been together seven years, say that they feel like Texas will be the last state to allow gay marriage.

“I anticipate Texas is going to dig its heels in and whatever (Gov. Rick) Perry can do to ensure that we don’t recognize any same-sex marriages for couples, for example, who married in New York and relocated here," he said. "We’re going to be the last, I … can feel it.”

Same-sex marriage has been contested at the ballot box in almost every state, debated in many state legislatures and been the subject of court battles for nearly 20 years.

Though the Supreme Court decisions were disappointing for anti-gay marriage activists, they noted that the rulings left open the door for states to continue to define who can wed. That battleground has favored opponents of same-sex marriage, who until last fall had an almost perfect record at the ballot box.

“The battle is going to continue to be fought out in the states as we fully expected," said John Eastman, chairman of the National Organization for Marriage, which has plowed tens of millions of dollars into the fights.

“This is a great win federally but now we have to focus at the state level … to get the (anti-gay marriage) amendment that’s in the Constitution of the state of Georgia reversed,” said John Fitzgivens, 49, and a senior business analyst in Atlanta. “… It may take another 20 years.”

Fitzgivens said he would volunteer his time with an LGBT group leading the fight for same-sex marriage. “The rubber's hitting the road,” he quipped.

His husband, Davis Harrington, whom he wed earlier this year in New York City, lamented the seemingly long journey for gays and lesbians to the altar.

“I think today was a step forward. I just wish the Supreme Court could say that gay marriage is not unconstitutional,” said Harrington, 50, who works in an antique store. “… I’m just tired of this thing having to take baby steps that seem so trivial.”

'Shouldn't have to uproot my life'
National campaign groups said they would use the momentum of the court victories to push for initiatives or legislative votes in states such as in Oregon and New Jersey, while also conducting public education campaigns in states like Ohio and Michigan to get them to reverse course, said Marc Solomon, national campaign director for Freedom to Marry.

Freedom to Marry hopes a majority of Americans will live in states where gays and lesbians can wed by 2016, Solomon said, adding that they ultimately believe the Supreme Court will revisit -- and give -- a final resolution to the issue.

“We added three more (same-sex marriage) states just in the past few months and we’re going to keep working to add more. We just have to keep at it,” he said.

In light of the DOMA win, his group has asked the federal government to consider recognizing marriages of same-sex couples who wed in states where it is legal, even if they don’t live there. 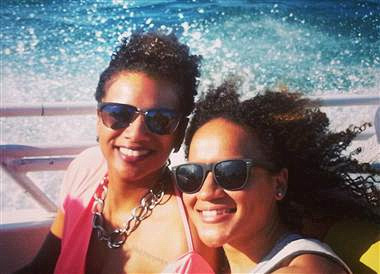 Left to right, Natasha DeJesus and Jelisa Caldwell plan to wed next January in New York City instead of in their home state of Florida, which bans same-sex marriage.

Such would be the hope for couple Jelisa Caldwell and Natasha DeJesus, who plan to wed next January in New York City instead of in their home state of Florida, which bans same-sex marriage.

When Caldwell, 24, who works in insurance sales, heard about the court ruling, her first question was whether they could change their plans and get married at home. But she quickly realized that they’d still have to go the Big Apple, where their union would be legal.

“It’s just another hurdle that we have to go through just to tie the knot and be equal to my mom and my dad,” said DeJesus, 27, who lives in Altamonte Springs and works in educational sales. “I think it’s sad, but it’s something that we want to do. We believe in it. We believe in being able to have those equal rights of others, so we’re going to make it happen.”

In Wisconsin, Kris Travis said that she has been waiting 21 years since she came out as a lesbian for the right to marry, but she is willing to wait a bit longer.