Marine's conviction overturned in killing of Iraqi father of 11 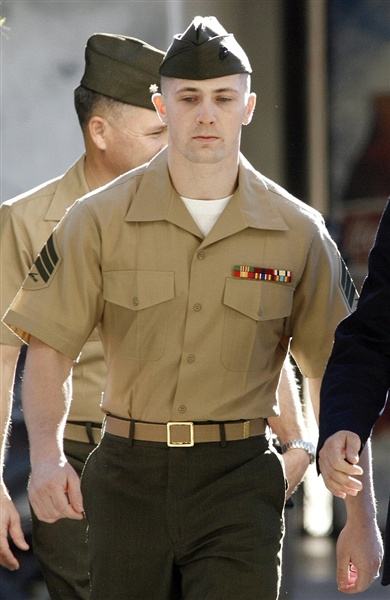 Marine Corps Sgt. Lawrence Hutchins, is seen at Camp Pendleton in 2006. His murder conviction was overturned on Wednesday.

LOS ANGELES - The highest military appeals court on Wednesday overturned the murder conviction of a Marine sergeant found guilty in 2007 of leading a squad in Iraq that was accused of killing a civilian they had captured, bound and gagged.

Three judges on the U.S. Court of Appeals for the Armed Forces found Sergeant Lawrence Hutchins gave a statement to a U.S. Navy investigator while in custody that should have been ruled inadmissible and tainted his court-martial.

The case stems from the 2006 death in Hamdania, Iraq, of Hashim Ibrahim Awad, 52, a father of 11 and grandfather of four.

In 2007, a court-martial at Camp Pendleton Marine Corps base north of San Diego sentenced Hutchins to 15 years in military prison after finding him guilty of unpremeditated murder, larceny and other crimes.

Hutchins was the leader of a squad that went on a mission aimed at stopping militants' use of improvised explosive devices. Witnesses had testified that Hutchins and another Marine shot Awad and placed an AK-47 and a shovel next to the corpse to suggest he had been planting a bomb.

Earlier, Awad had been bound and gagged at another location, according to a finding by a lower court of appeal for the military.

In its ruling on Wednesday, the U.S. Court of Appeals for the Armed Forces said that in May 2006, a Navy investigator began to question Hutchins but he invoked his right to an attorney and was put under guard in a trailer.

Hutchins was not allowed to call a lawyer and no attorney was provided to him, according to the ruling written by Judge Charles Erdmann. Seven days later, the investigator entered the trailer and asked to search Hutchins' belongings and the sergeant said he wanted to talk, the ruling stated.

The next day, Hutchins provided a written confession, the ruling continued.

The court found that after Hutchins requested an attorney the investigator had initiated the conversation - by coming back for a search. That led to Hutchins' admission and the judge and two colleagues found that it violated his constitutional right to remain silent.

The U.S. Court of Appeals for the Armed Forces found "it was an error for the military judge to admit the statement made by Hutchins," which was used at his court-martial.

"Therefore, notwithstanding the other evidence of Hutchins' guilt, there is a reasonable likelihood that the statement contributed to the verdict," the court ruled.

A spokesman for Camp Pendleton where the 2007 court-martial was held said he could not comment on whether Hutchins might soon be released from custody.

The U.S. Court of Appeals for the Armed Forces sent the case to a military judge advocate general for referral to an "appropriate convening authority who may authorize a rehearing."