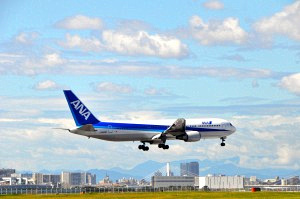 An ANA jet landing in Tokyo

ANA Holdings, the parent company of All Nippon Airways, announced that it has placed orders for 40 new Boeing aircraft and 30 new Airbus jets to be delivered between the years 2016 and 2027.  The order is valued at a total of 1700 billion yen, or $16.6 billion.

The new Boeing aircraft will mostly be used to operate international flights, while the Airbus jets will be used on both international and domestic routes.

The airline group’s recent fleet expansion was undertaken in preparation for the 2020 Summer Olympic Games in Tokyo, which is expected to significantly increase the number of visitors to Japan.