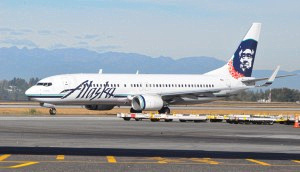 An Alaska Airlines 737 in Seattle

Alaska Airlines announced that members of its Mileage Plan frequent flyer program can now earn double points on British Airways-operated flights between Seattle and London Heathrow through June 24 of this year.  British Airways offers 10 flights a week between the two cities.

In order to qualify for the double points, passengers must be enrolled in Alaska’s Mileage Plan program, and must also register for the promotion through Alaska Airlines’ website prior to their first qualifying flight.