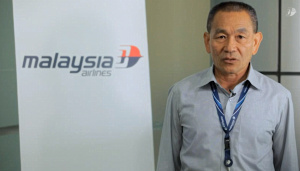 As the search for the wreckage of Malaysia Airlines Flight 370 continued late Monday, the country’s prime minister, Najib Razak, said Monday that the missing aircraft flew along the southern corridor and that its last known location was in the southern Indian Ocean west of Perth.

The airline told relatives of survivors that the plane is “lost” and that there were no survivors.

The flight “ended” in the Southern Corridor, the prime minister said, referencing data from Inmarsat images.

In a video, the airline’s group CEO, Ahmad Jauhari, discussed the lost aircraft.

“It has been an extremely difficult period for the family and friends of passengers and crews,” said Mr. Jauhari.  “Each hour that passes without a development prolongs the anguish and despair.”