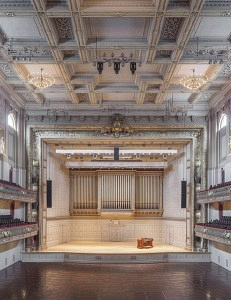 The Boston Symphony Orchestra recently released its 2014-2015 season schedule. The orchestra also announced that conductor Andris Nelsons will be joining for his first season as music director of the BSO.

Nelsons’ first event will take place on September 27, with Wagner’s Overture to Tannhauserr, as well as a performance by Kristine Opolais, accomplished soprano and wife of Mr. Nelsons, where she will be joined by tenor Jonas Kaufmann as they accompany the orchestra on showpieces by Puccini, Respighi, and Wagner, among others.

Throughout the season, which runs from September 18, 2014 until May 2, 2015, there will be performances featuring works such notable composers as Mahler, Shostakovich, Beethoven, Bartók, and Tchaikovsky.

In addition, collaborations between the orchestra and numerous other musical talents are planned over the course of the season, including performances by trumpeter Håkan Hardenberger, violinists Baiba Skride and Christian Tetzlaff, cellists Gautier Capuçon and Yo-Yo Ma, pianists Lars Vogt and Richard Goode, singers Pavel Černoch and Kostas Smorigninas, organist Olivier Latry, and the Tanglewood Festival Chorus.

Tickets for the 134th season of the Boston Symphony Orchestra go on sale on August 4.