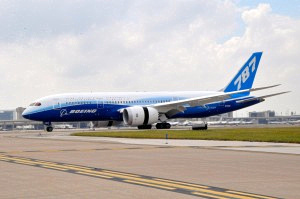 A Boeing Dreamliner used for testing

The joint review, conducted with Boeing, the plane’s manufacturer, found that the design of the 787-8 Dreamliner met its “safety level.”  Initiated after several battery fires in January 2013, it included an examination of the processes for the plane’s design, certification, and production.  The FAA said that the plane was “soundly designed.”

The findings were announced in a briefing conducted by FAA Administrator Michael Huerta.

The joint review did come out with several recommendations for improvements in both Boeing’s processes and FAA oversight of the development of new airplanes.  These include a focus on “improving the flow of information, standards, and expectations” between Boeing and its suppliers, according to a statement released by Boeing.  Boeing added that it has already begun to implement these recommendations.

Another recommendation covers what are known as “gated processes,” which according to Boeing would ensure that “a sufficient level of maturity is gained” before a new airplane program reaches a key milestone such as design completion and start of production.   It calls for Boeing to continue “implementing and maturing” these programs.

“The findings validate our confidence in both the design of the airplane and the disciplined process used to identify and correct in-service issues as they arise,” said Ray Conner, president of Boeing Commercial Airplanes.

Over the past year, Boeing has restructured its operations to bring all commercial airplane development under one umbrella organization.