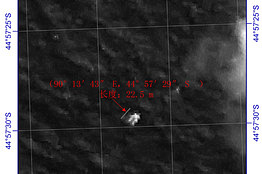 The search for the missing Malaysia Airlines jet continued with a new development after China said that it had spotted a large object in the search area that is the first potential lead in three days.

The news was announced by Hishammuddin Hussein, Malaysia’s defense minister and acting transport minister after he was handed a note during a routine press briefing on the missing aircraft.  During the news conference, he expressed concern about a category one cyclone that is forming in the Indian Ocean.

“The news that I just received is that the Chinese ambassador received a satellite image of a floating object in the southern corridor and they will be sending ships to verify,” said Hussein.

China and Japan said Saturday that they would send military aircraft to join the Australian-led search of the southern Indian Ocean Saturday after a Chinese defense agency said that an analysis of its satellite images showed a large object, 22 meters (72.18 feet) long and 13 meters (42.6 feet) wide floating there.

The announcement also came via a statement on the State Administration of Science, Technology, and Industry for National Defense’s website.  The images were taken on Tuesday by the Chinese satellite Gaofen-1.

The object is believed to be floating 120 kilometers (75 miles) southwest of where Australia had first seen suspected debris from MH370.  The agency said that the new images were analyzed by Chinese government’s satellite resource center and a remote sensing research institute that is part of the Chinese Academy of Science.

The Chinese government announced that two IL-76 transport aircraft had been dispatched to the region Saturday and will take part in the air search starting Sunday.  The search in the area has been ongoing for several days.  Led by the Royal Australian Air Force from a base in Perth, it has also included the U.S. Air Force and the Royal New Zealand Air Force.  The Japan Air Self-Defense planes are expected to arrive Sunday and join the search at the start of the week.