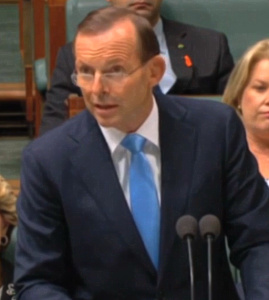 As the search for the missing Malaysia Airlines jetliner continued in the southern Indian Ocean Sunday, new leads emerged.

At a news conference Sunday, Australian Prime Minister Tony Abbott told reporters that the authorities leading the search had a number of credible leads that showed promise.

“It is still too early to be definite, but obviously we have now had a number of very credible leads and there is increasing hope –no more than hope – that we might be on the road to discovering what happened to this ill-fated aircraft,” said Abbott.

The Malaysian Ministry of Transport also revealed that it had received new satellite images from French authorities.  The images showed potential objects in the current area of the search and were given to the Australian authorities that are coordinating the search effort in the region, according to a statement released by the ministry.

The ministry also provided an update on the Acars data received from the missing plane, which was received at 1:07 a.m. the day of the flight, saying that the last Acars transmission showed nothing usual and indicated a “normal route” to Beijing.

On Saturday, China said that it had spotted a large object in the search area on its satellite images.  The State Administration of Science, Technology, and Industry for National Defense in China said that an analysis of its satellite images showed a large object, 22 meters (72.18 feet) long and 13 meters (42.6 feet) wide floating in the southern Indian Ocean.  The Australian prime minister said that the Chinese images were consistent with earlier satellite photos announced Thursday and that the objects could very well be the same, moved thanks to ocean currents.

Mr. Abbott told reporters that a number of “significant’ small items, including a wooden pallet surrounded by strapping belts, had been seen by searchers Saturday.