The history of the Hotel Bristol mirrors the history of Poland and, to some extent, Eastern Europe.  It was built at the turn of the last century by a group that included Polish pianist Ignacy Jan Paderewski and opened its doors in November 1901.  When Poland gained its independence in 1919, Paderewski served as the country’s first prime minister and the hotel was the site of the first session of the new government.

It survived the Second World War as a government building relatively unscathed and reopened after renovations in 1945 only to be nationalized by the Communist Government a few years later.  The structure wasn’t maintained very well and fell into disrepair, eventually becoming a library for the University of Warsaw in the 1970s.  However, following the fall of Communism, it was completely restored to the glory it enjoyed in the decadent 1920s and its public rooms were redone in accordance with the original designs, including several by the noted Viennese architect Otto Wagner.

One thing I was curious about was the name, “Bristol” since there are several luxury properties named Bristol.  In the course of doing some research, I found out that the use of the name at quality hotels in Europe can be traced to Frederick Hervey, the 4th Earl of Bristol, who was known as an avid traveller. 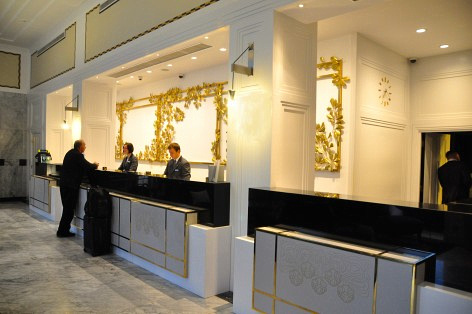 I arrived at the Bristol on my first-ever trip to Poland, appropriately enough flying on LOT Polish Airlines’ brand-new Boeing 787 Dreamliner to get there.  Check-in formalities were brief and I was immediately shown to my room.

The Bristol Suite was comprised of a bedroom and a small living room, along with a separate bath area.  It was spacious and elegant, fully in keeping with what I had expected after seeing the lobby and café upon arrival.  The term “posh elegance” came to mind.

The arrangement of the suite, a bit unusual in that one entered through the bedroom, instead of through the living room or a foyer, was nonetheless well laid out and useful for hosting small meetings.