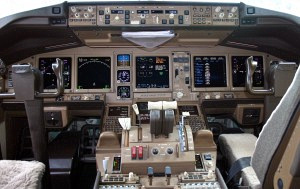 Investigators working on the case of the lost Malaysia Airlines jet announced that there had been an additional partial transmission from the aircraft eight minutes after the last complete transmission and that it could lead to some answers about what happened to the plane.

After the plane disappeared from radar screens, it continued to communicate with a satellite operated by Inmarsat on an hourly basis. Inmarsat developed a way of analyzing the difference between the frequency that the ground station expected to receive and that it actually recorded.  The difference is due to the Doppler effect and is known as the Burst Frequency Offset.

Using this information, Inmarsat investigators were able to plot a direction and general course for the plane.

In a statement released Tuesday by Hishammuddin Hussein, the country’s minister of defense and acting minister of transport, officials said that the U.K. Air Accidents Investigation Branch found “evidence of a partial handshake between the aircraft and ground station” that followed the last complete ping eight minutes earlier.  “At this time this transmission is not understood and is subject to further ongoing work,” he added.

Inmarsat, which analyzed the data, said that human interaction with the satellite communications system had been ruled out.

In his statement, Mr. Hussein said that Malaysian authorities had set up “an international working group, comprising agencies with expertise in satellite communications and aircraft performance,” to interpret and understand Inmarsat’s findings