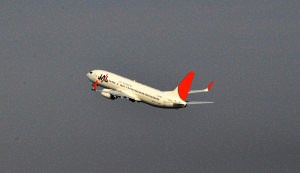 A JAL aircraft taking off from Haneda

JetBlue Airways and Japan Airlines announced that the two airlines will expand their codeshare agreement beginning March 30.  After this date, Japan Airlines will be able to place its code on various JetBlue-operated flights within the United States.

Select JetBlue routes that Japan Airlines will codeshare on include service between New York and both Buffalo and Raleigh/Durham, as well as between San Francisco and Long Beach, Fort Lauderdale, and Boston.  The carrier will also be allowed to place its code on JetBlue-operated flights linking Boston with Detroit.

The new codeshare routes are intended to coincide with the start of Japan Airline’s additional daily service between Tokyo Narita and New York’s John F. Kennedy International Airport, also set to begin on March 30. The new codeshare flights should facilitate easier and same-day connections for passengers traveling to various U.S. cities through JFK.

Tickets for the new codeshare flights will be available beginning March 25.

JetBlue and Japan Airlines first began their codeshare agreement in June 2012, which covered a variety of connecting flights from Boston and New York.