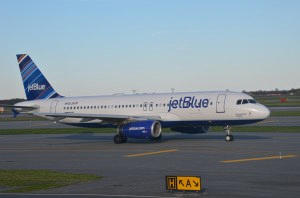 A JetBlue aircraft at JFK

JetBlue announced operational results for February 2014. System traffic for the airline was 2.64 billion revenue passenger miles or RPMs, a year-over-year increase of 5.2%, while the carrier had a capacity of 3.23 billion available seat miles or ASMs, an increase of 6.3% from February 2013.

Passenger revenue per available seat mile, or Prasm, , showed an increase of 7% year-over-year. February’s Prasm includes approximately one percentage point of benefit from weather-related cancellations during that month.

The airline estimates that Prasm will show a year-over-year increase of between 1% and 2% for the first quarter of 2014.