Since the integration of information tech into the car of the 21st century is moving quickly ahead, automakers use the show to present their current and upcoming technology offerings.

At the 2014 CeBit, members of the Volkswagen Group presented numerous innovations showcasing the combination and integration of IT under the slogan “E-Mobility”.

Ingolstadt-based Audi presented its vision of the future of automotive cockpits.  James2025 is a virtual cockpit that features controls that automatically adapt to current driving conditions, a pop-up secondary display with gesture based controls, and a retractable electric cupholder.  The system also provides an autopilot mode that turns on its autonomous driving capability, which would momentarily take over control of the car while the driver’s attention is focused elsewhere. Should the driver fail to resume active control by the expiration of the autopilot timer period, the car would automatically be brought to a safe stop. 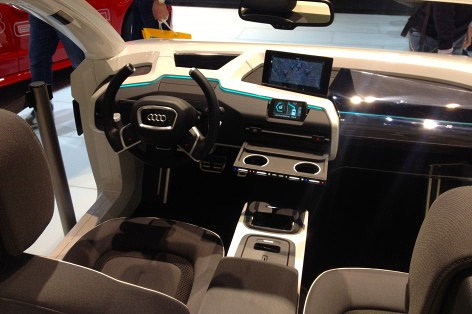 Alongside the James2025 virtual cockpit, Audi showed off the new Audi A3 Sportback e-tron, which has an electric-only driving range of 31 miles (50 kilometers).

Porsche displayed the Panamera S E-Hybrid. The Panamera showcased the connectivity between the driver´s smartphone with the car’s onboard system. The driver can display, on his smartphone, varied car status information, including the current battery charging level and the maximal driving range.

The Panamera S E-Hybrid provides a combined power output of 416 horsepower  that accelerates the car from a standstill to 62 mph (100 km/h) in 5.5 seconds. Porsche reports a fuel economy rating of 75 mpg (3.1 l/100 kilometer) and the car can operate for 22 miles (36 kilometer) on electric power alone.

Volkswagen displayed the electric-powered Volkswagen e-Up together with the ultra fuel-efficient Volkswagen XL1. The two-seater XL1 offers a maximum electric driving range of 31 miles (50 kilometers) and can deliver up to 261 miles per gallon (0.9 l/100 km) thanks to its ultra-aerodynamic design with a drag coefficient of only 0.189 and its low weight of 1.752 pounds (795 kilograms). The electric engine of the VW e-Up develops 82 horsepower, 154 pound-feet of torque, and has a driving range of 99 miles (160 kilometer). The car’s batteries can be recharged within half an hour when plugged into a direct current electrical outlet. The e-Up goes from 0-62 mph (0-100 km/h) in 12.4 seconds and has a top speed of 80 mph (130 km/h).

To give CeBit attendees an introduction to electro-mobility, Volkswagen deployed a fleet of 15 e-Ups  to shuttle attendees around the fair.  To further give attendees an idea of fleet management systems of the future, Volkswagen is gathering real-time data on vehicle location, battery charge, and range, and displays it at its stand at the show.