MUNICH — Chicago O’Hare International Airport, named after Edward O’Hare, the U.S. Navy’s first flying ace, is one out of seven destinations with a direct connection from Munich International Airport offered by the German flag carrier Lufthansa. (The other direct connections are Boston, New York, Newark, Charlotte, San Francisco and Los Angeles.) The Munich-Chicago route has been in service by Lufthansa since March 1995 and Lufthansa uses mainly Airbus A330 and A340 aircraft on this route. On my flight, an Airbus A330-300, configured with Lufthansa’s new first- and business class cabin, was scheduled for this flight.

Given the severe winter weather in the midwestern United States at the time of my trip in early January, I was not quite certain whether my flight would not be cancelled or delayed. Absent any bad news, I headed to Munich Airport in the early afternoon.

My westbound flight from Munich to Chicago was scheduled for 3:40 p.m. The security check at Munich’s Franz-Josef Strauss Airport, named after the former Bavarian Prime Minister, was quick and smooth as I was the only passenger at the Business/First-Class line. Shortly thereafter, I was on my way to border control and soon arrived at the final security check, located next to the gate in departure area H. 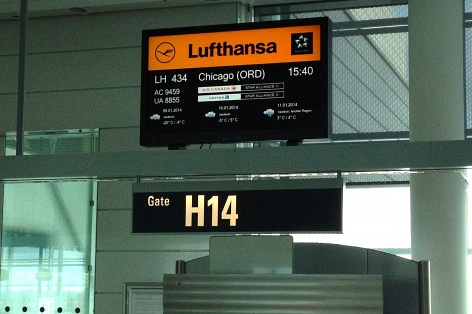 Boarding commenced about 45 minutes before the scheduled departure time. Passengers with disabilities and those with children were invited to board first, followed by first- and business-class passengers and Star Alliance Gold members. I was soon on board and received a friendly greeting from a flight attendant who showed me to window seat 10K. Readily apparent was a change from the original configuration of Lufthansa’s business-class seats. While the seats are still arranged in a 2-2-2 layout, the seats on the outboard sides of the cabin are no longer angled toward each other. In each row, only the two seats between the aisles are still oriented in a V-like configuration.

Lufthansa introduced its all-new first and business class cabin design with the arrival, in 2012, of the Boeing 747-8 to their long-haul fleet.  At that time, the carrier also started to update all premium cabins in its long-haul fleet although there are still aircraft, including the A380, which are currently outfitted with the more than ten year old first- and business class seats.