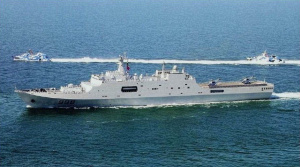 The Chinese transport dock Kunlun Shan is participating in the search

As Day 5 in the search for the missing Malaysian Airlines jet drew to a close in the region, no new leads emerged and officials were warning that no quick answers were expected.

On Tuesday, officials continued to contradict one another as a Malaysian air force official categorically rejected reports that the Malaysian military had tracked the plane by radar over the Strait of Malacca, one of the world’s busiest maritime shipping channels.

Meanwhile, frustrations grew both for airline officials and relatives of the missing 227 passengers and 12 crew members who were on board Malaysia Airlines flight 370 on Saturday when it went missing

Flight 370 departed Saturday from Kuala Lumpur at 12:41 a.m. local time with 227 passengers and 12 crew members on board, and was originally scheduled to land in Beijing at 6:30 a.m.

The aircraft was flying at a cruising altitude of 35,000 feet in good weather.  The usual causes of plane crashes include mechanical failure, bad weather, and pilot conditions.  As experts have noted, planes don’t typically vanish or fall out of the sky absent sabotage or another catastrophic event.

None of the aircraft’s transmitters appear to have sent a distress signal before the jet disappeared.

Commercial airliners also have emergency locator beacons that are activated by impact on land or water, but Malaysian aviation regulators say that these transmitters have not been sending signals.