Some Intriguing Trivia Tidbits on Shooting ‘The Shining’ 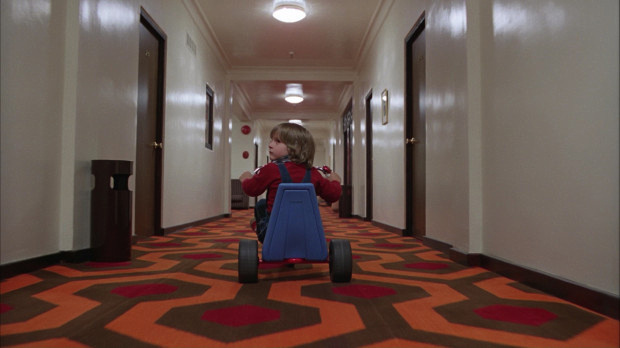 There is little doubt that auteur Stanley Kubrick looms large as a director able to distinctively bring his films to life through his vision. He has left his mark across the motion picture landscape.

He also happens to be responsible for some very interesting technical results in the realm of photography as well (including owning 3 of the 10 Carl Zeiss Planar 50mm f/0.7 ever made).

Any words I write here about him will pale in comparison to the reams of scholarly works already published. And so, instead, I give you a couple of fascinating pieces of Shining/Kubrick trivia that you can whip out the next time there’s a lull in conversation.

One interesting addition Kubrick made to the world of film came in a modification of Garrett Brown‘s steadicam. Prior to Kubrick’s request, the steadicam could only film from as low as the operators waist. In order to capture an extremely low angle while shooting The Shining, Kubrick requested that the rig be modified in order to accommodate shooting from almost floor level (this modification would go on to be considered by many as the most important in the history of the steadicam).

This was an important aspect of the film. As the main protagonist would be a small boy, Kubrick wanted the viewpoint to reflect Danny’s view of the world. In the video sequence above, Garrett Brown followed Danny through the hotel, with the steadicam in low mode, while sitting in a wheelchair.

While interesting from an equipment aspect, there is one other scene that may be overlooked by many viewers of the film as being rather ordinary but in reality is quite unique.

This shot from the balcony looking down into the main lounge where Jack Torrance had set up his typewriter, with a nice full fire in the fireplace going, is the only in-camera special effect in the entire film. 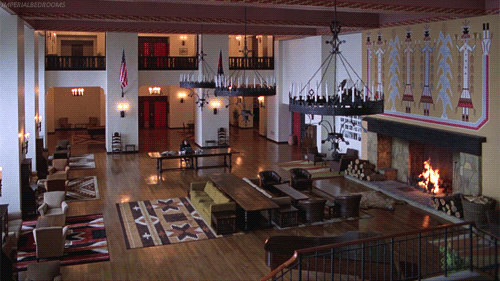 Director of Photography John Alcott discusses this scene in the August, 1980 issue of American Cinematographer:

There is a sequence looking down from the balcony with Jack at the typewriter and the fireplace in the shot. I wanted to get a full fire effect, a nice big glowing fire in the fireplace, but I didn’t want to reduce the general lighting in any way because I needed the depth of field. So I shot the scene all the way through without the fire burning, then rewound the film, killed every light on the set, lit the fire, opened the lens up to T/1.4 and shot the fire by itself — which gave me a nice glowing fire. It was something I thought would be different to do and it was worth a try anyway. But I think that’s really the only kind of ‘special effect’ we did in the camera.

The only in-camera special effect in the movie was for this one scene that had to be shot as a double exposure to have the fireplace lit properly. This is a brilliant example of overcoming issues to arrive at a creative vision, and a neat piece of film history trivia as well.

Another piece of trivia for this scene is that none of the lighting in it is natural. The image above is on a soundstage, and the natural looking light coming from the left were 80′×30′ diffusers lit by 860 1000-watt Medium Flood PAR 64 lamps!