In the year 753 BC, Romulus and Remus, twin brothers abandoned upon birth and raised by a she-wolf, founded Rome.  Of course, as brothers often do, they quarreled over their newfound discovery, and after the fight turned fatal for Remus, Romulus named the city after himself.  At least, that’s how the story goes according to legend and myth.  The Roman Empire grew in size and population, spanning 2.5 million square miles (6.5 million square kilometers) at its peak.

Skipping ahead a couple dozen centuries brings us to present-day Rome, a city full of the history it has witnessed.  Throughout its maturation, Rome gave birth to some of the world’s most renowned art, poetry, music, and literature, and the city continues to be an influential power in the world of culture and politics.

Much has changed since Rome’s ancient days, but one of the most distinguishing and attractive aspects of the city is the way in which the new melds with the old.  Next to a modern shopping center lay ruins from centuries earlier.  It’s a shocking yet beautiful contrast. 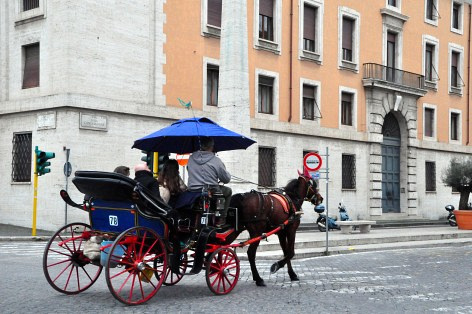 Before you go wandering the streets of Rome, make a note to absorb some Italian during your visit. Luckily, the Italian language has very few rules and exceptions, and is quite easy to pronounce thanks to its intrinsically phonetic nature.  The vast majority of Italian words also end in a vowel, which makes conversations sound flowing and melodious.  The archetypical romance language, indeed.

A city as imposing as Rome bestows travelers with an abundance of sights to enjoy and things to do.  If you try to see Rome in three hours, as editorial director Jonathan Spira attempted recently, you’ll catch a brief glimpse into the lives of modern-day Romans, but you will not have an authentic experience.

Assuming you have the time to do so, I suggest what I always suggest to newcomers to an unfamiliar city: walk.  Walking around a city is a surefire way to have a personal experience that differs from that which a guidebook may prescribe.  It may be during your walk from the Colosseum,or Coliseum, to the Trevi Fountain when you happen upon a tiny museum or quaint restaurant that provides memories far more powerful and long-lasting than those of the famous landmarks.  There’s no reason not to see the landmarks and have a local experience as well; so explore and discover…  but be ready to see a lot of piazzas, churches, and the ever-present fountains.

Click here to continue to Page 2 – The Colosseum,  Pantheon, and Where to Eat