Film on the Gowanus Canal 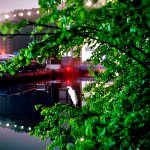 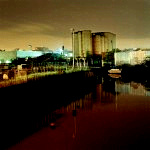 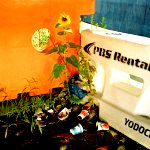 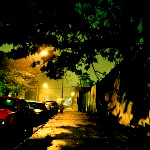 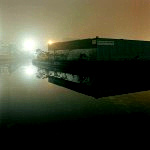 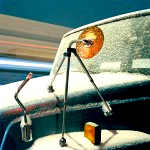 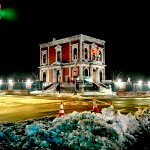 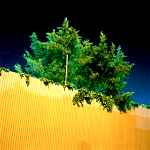 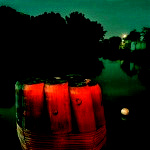 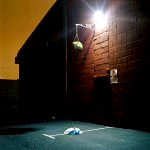 In the 1800s, the Gowanus Canal, a 1.8 mile long waterway in Brooklyn, was once a busy transportation hub. The canal did not stand the test of time, as waste run-off from nearby buildings and industrial facilities, spilled into it’s once clean water. Today, most residents of Gowanus and it’s surrounding neighborhoods consider it a smelly eyesore. But for one resident, photographer Miska Draskoczy, the canal is his muse.

PDN: What piqued your interest in shooting the canal?

Draskoczy: When I first moved to the neighborhood I became fascinated by how eerie and empty the streets were at night when walking home. At the time I was also hitting a real peak of outdoors activity…so I think the two began to overlap. Once I noticed a thematic thread in what I was shooting, I thought it was an interesting paradox.

PDN: What kind of techniques/equipment were used to get the super-saturated, poppy, bright colors?

Draskoczy: I shot this series on medium-format film, which reacts in strange ways with long exposure and street light. The light just soaks into the negative in a way that doesn’t happen with digital and creates a unique color palette. Then there’s the idea that there’s no real ‘normal’ white balance with weird lighting like sodium vapor street lights, so in some cases I’m arbitrarily defining what normal is as I work the scans to a baseline correction.

PDN: How many images are in the series? Is it ongoing?

Draskoczy: There are about 25 core images in the series. There is a larger edit of around 60 images for a proposed Gowanus Wild book project. Also, Gowanus has changed tremendously in the last year and frankly it doesn’t feel as ‘wild’ as it did before. Lots of people are on the streets late at night, bars and restaurants are open in once-dead areas, squeaky clean developments are springing up. I’d like to do a sequel series, “Gowanus Tamed,” an investigation of nature in the neighborhood once everything is all cleaned up and domesticated.

PDN: Is the combination of opposing themes—organic versus industrial, stillness within urban chaos—a repeated pattern in your work?

Draskoczy: I’ve always been fascinated by city texture. New York City, in particular, is so complex in its layering of construction and consumption over decay and disposal. Nature has always been a big part of my life, too. I grew up in rural areas and spend a lot of time outside the city. So while I’ve done work before that digs into both those themes, this is perhaps the first time the two have come together.

PDN: To make these images you had to navigate around the grossness of the canal. Anything crazy happen?

Draskoczy: I never fell or dropped anything into the canal (thank god). But I noticed cabbies would park on a particular bridge, disappear down a ladder to the water and reappear many minutes later…I had visions of secret drug deals, undercover CIA hand-offs or mutant shape-shifting drivers. The explanation turned out to be far more pedestrian when I saw one of them pulling up their pants after re-emerging. I guess they figure the canal is filled with sewage, so what’s a little bit more.

PDN: What are you working on now?

Draskoczy: I have a dummy for the “Gowanus Wild” book I’m pretty happy with so I’m hoping the project will come together later this year. In the meantime I’ve been shooting a fun project for a while now on the side called “Adverse Reaction,” a series documenting subway graffiti in NYC. These images are much more lo-fi. I want to do a simple book for that soon.

I began taking a plastic camera on climbing trips a couple years ago so I could shoot medium-format film without carrying tons of weight. That’s slowly developing into a long-term series, “Raw are the Bones of My Earth,” which is not just about climbing but adventure and the elemental. Otherwise I’m in the research and experimentation phase for a few long-term projects, trying to figure out which one will stick.