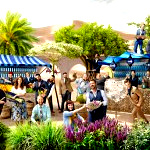 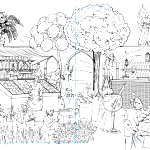 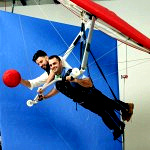 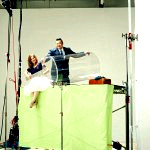 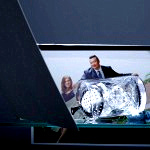 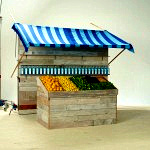 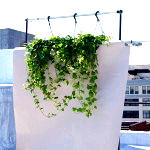 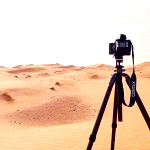 In 2013, Ryan Partnership hired conceptual photographer Dean West to come up with an imaginative image for the United States Bartender’s Guild’s annual “Most Imaginative Bartender” competition, presented by Bombay Sapphire and GQ magazine. This annual event invites bartenders from all across America to make their best and inspired cocktails using Bombay Sapphire gin. West photographed forty-five finalists in the 2013 campaign in a set created to look like an old-fashioned bar. He was hired in 2014 to shoot his second campaign for the brand. Thirty-eight subjects and a whole lot of props ended up in the 8-page advertorial. PDN asked West, who worked with more than 16 people on the shoot, to explain the process.

PDN: Tell me about the concept of the shoot…was it a collaboration?

West: After the success of the 2013 Bombay Sapphire Most Imaginative Bartender campaign, the Ryan Partnership invited me to become a part of the creative process very early on. The idea was to showcase a botanical marketplace in a flourishing desert oasis [Slide 2]. A place where any true cocktail artist could explore the limitless possibilities of their art—The Sapphire Garden. I worked with the agency early on, however from there, the agency fine-tuned the idea to line up with the brand, consulting with me for photographic solutions for their grand ideas. Once the creative was confirmed, I then worked with my illustrator to refine the original sketch to an image that we would work off for the rest of the production.

PDN: When did pre-production begin, when was it shot, how long did the post-production take?

West: Brainstorming sessions began in March 2014. Producing the estimate for this job took about a month, from trying to locate unique botanicals from around the world to costing out shooting the best sand dunes we could find in Morocco [Slide 9]. Pre-pro began in August after a budget was finalized and I flew straight to Morocco to start building a stock library of sand dunes and desert architecture. All the bartenders were shot in Las Vegas during the event in early September. From there we had exactly four weeks to shoot the rest of the elements and complete the post-production [Slides 3-8].

PDN: This image is a composite. What were the various pieces?

West: The base architecture (sand dunes and ground) were shot in Morocco. This needed to be completed before the shoot in Las Vegas so we could ensure the correct materials were used for matching colorcasts and reflections. The set (produce stand and sapphire bar) were built and shot in Las Vegas along with the bartenders and the remainder of the botanicals.

PDN: What were the biggest technical challenges you had to overcome in putting this together?

West: There were, of course, many challenges to overcome with this project. The biggest, however, was matching the perspective and lighting across the elements. With 38 people and over 50 different elements to be shot and composited, this is where an image can succeed or fail.

Another huge challenge was the cocktails and glassware. As these props are transparent, shooting the drinks against a clean background would not work. For this, we waited until the image was approx 95% complete. The backgrounds were then printed out as large format prints and placed behind the regular-sized cocktails. This ensures the image being seen through the drinks matches up with the background.