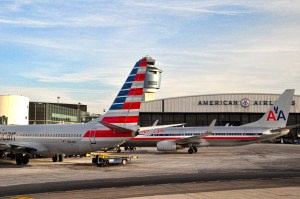 The airline only released consolidated results and did not break down reporting between American and US Airways.   February is the second full month in which the two airlines operated under one corporate umbrella following the merger.

The airline’s consolidated load factor for February was 78.4%, a decrease of 0.3 percentage points compared with February 2013.

American showed the greatest improvement in its international operations, with a 1.2% increase in revenue passenger miles with a 4.8% increase in available seat miles, while domestic RPMs increased 0.2% with a 0.6% decrease in domestic ASMs. Mainline RPMs were up 0.5% with a 1.3% increase in ASMs, while regional ASMs decreased 3.9% and regional RPMs stayed virtually unchanged from last year.

Despite weather-related flight cancellations in the first two months of this year, American said it expects passenger revenue per available seat mile or Prasm in the first quarter of 2014 to increase by between 2% to 4% over the same period in 2013.