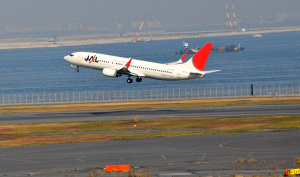 A JAL aircraft taking off at Tokyo’s Haneda Airport

Japan Airlines and S7 Airlines of Russia announced plans to increase the number of flights covered by their codeshare agreement starting March 19 of this year.  Both airlines are members of the oneworld alliance.

The new codeshare flights will be on 12 routes between Moscow Domodedova Airport and domestic locations in Russia.

St. Petersburg is the second-largest city in Russia, while Sochi hosted the 2014 Winter Olympic Games.